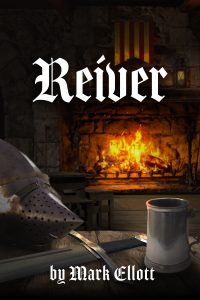 In fifteenth century, the border between England and Scotland was a wild place with its own laws. Allegiances were to the clan rather than country.

In August 1402, Edmund Collingwood joins a Scottish raid south into England, an enterprise that takes him on an adventure leading to a clash with the powerful Percy family and rebellion against the crown. And what of the Dowager comtesse d’Alençon, held captive at Chepstow castle? How is her destiny entwined with Edmund’s and what is the secret that she keeps? Edmund is about to find out.

Reiver is both an adventure and a romance that commences with a battle in the wild marches of Northumberland and concludes in a siege in northern France.

This book should be out at the end of January 2021. In the meantime, we have a cover.