I slopped some emotional paint over the offending patch and paused. Well, it brings tears to my eyes. We’d decided on blue. Blue is okay. I can live with blue.

Mandy crouched among the debris of old paper peelings and paint-drippings, the sunlight streaming through the airborne plaster dust catching the amusement in her eyes. “It’s coming along.”

I hate DIY. Every Sunday you can hear ’em with their Black and Deckers goin’ it – buzzing incessantly into the peace of the morning and those that aren’t are polishin’ their motors. Happy Valley Sunday; DIY, clean the car, take the kids to the park. Not me, not bloody likely. I rise above the mundane. At least, I try. “Grey,” she said. “For the woodwork. It’s neutral and will compliment the blue.” Mandy loved it. Interior design, she called it. But then, she would, being an interior designer.

That’s how we met. She breezed into the office clutching books of colour samples and fabric swatches. The incandescence of early May flooded through the shabby vertical blinds, illuminating the faded cream walls of the office, Blue-tac and cracks ‘n’ all. Summer was advancing and I decided the place needed a new look. Paul agreed with me. Bein’ the senior partner my word was the final one anyway, but I kinda liked to have agreement on these things. We called in an interior designer that Paul knew. “She’s good,” he said. She was, too. I’ve a thing about redheads and Mandy was no exception – I was smitten on first sight.

“Pastel yellows would look well in here,” she said.

“Mm,” I wasn’t listening – I was too busy looking.

“You make it sound like a fashion show,” I said.

“It is,” she answered lightly, casting a practised eye over the easy chairs surrounding the low coffee table complete with paper cups, coffee slops and old bike magazines. Her gaze shifted across the room to the controller’s desk where the radio crackled as the riders called each other and occasionally us. “Yellow,” Mandy confirmed. “Apple white for the ceiling and…” she paused, following the peeling skirting with half closed eyes. “White for the timber. It will make the room look inviting.  What do you plan to do with the furniture?”

Planned? I didn’t realise there was a plan and said as much.

“If you’re going to redesign an office,” Mandy replied tartly, “then you should redesign the whole, not just slosh some paint on walls.”

Sloshing some paint on the walls was exactly what I had in mind. She didn’t say “pleb” but then she didn’t have to.

Ours was one of those whirlwind thingys. You hear a lot about them but when it’s you, you don’t quite believe it. We saw Mandy regularly during the to-ing it and fro-ing of the redecoration or redesign, as she preferred to call it. Somehow we usually found an excuse to meet that involved working lunches – alfresco salads and pizzas grabbed during the precious gaps in our hectic professional lives while the frenetic spring wound into lazy summer. We grew closer during those weeks when the days grew longer and seemed as though they would never end. Paul said nothing but he would give me a sly smile if I caught his eye. I chose to ignore him and he played along.

We bought the house within months. At least as quickly as it is possible to buy a house within the constraints of the bureaucratic chaos that passes for real estate in Britain. It was a tip. The previous owner was a DIY enthusiast. I wanted to keep looking – if I had my way DIY would be an offence punishable by torture, preferably applied enthusiastically with an orbital sander and paint stripper. This guy was one of those people who takes out the Black ‘n’ Decker on a Sunday morning, knocks up a melamine wardrobe before lunch and wonders why it’s listing to port by teatime. I hated it. I hated him too, because Mandy loved the place and I was about to inherit his legacy of bodges. “Don’t worry,” Mandy soothed, “it’ll be okay. Lick of paint and you won’t notice.” It didn’t matter to her that the house was more messed up than a chameleon in a Cameron kilt. She was right though – it came up a treat.

“Yeah, okay, okay,” I replied, hearing my own words echoing back at me over the years.

The hallway was too tall to reach the top, so we balanced a ladder halfway up with a plank across the stairs. It worked, but was a little on the narrow side.

“Careful,” I’d said. I tried tellin’ her, but y’know, sometimes it’s like in one ear and off a duck’s back.

She stepped back to admire her handiwork. One step back and twenty down.

“Oh, shit,” she said. Last words she ever said.

Our brief time together was full of chatter – banter and laughter, but we never got around to saying the things that mattered. And now we never would. We met in the spring, loved through the summer and by autumn she was a memory.

“This place could do with a freshen’ up,” Paul said, slurping a gargantuan coffee.

“What’s wrong with it?” I asked defensively.

“Nothing, exactly…” Paul didn’t usually squirm, so it came as a mild surprise to witness an event that was much like an eclipse of the sun, only entirely different. “It’s just…well…this place has Mandy written all over it…” he trailed off awkwardly.

“Probably because she designed it,” I replied with just enough citric in my voice to make the point.

“That’s what I’m tryin’ to say,” Paul pressed on like some bull at a glass house.

“And I should just forget? Because she’s dead? Is that what you’re sayin’?”

“No, not forget. Move on, that’s all.” The Light Brigade needed troopers like Paul – might’ve won the Crimea. “Look, you gotta get on with your life. Remember the good times with Mandy, but look forward too.”

“Lecture over?” I moved up a gear into nitric with a north wind blowing through it.

“Yeah, guess so.” Paul left, but strangely his words took root and flourished. Before long I’d been to the DIY shop collected some colour charts and set about making choices for redecorating the hallway.  Perhaps Paul was right. After five years it was time for change, time maybe to shrug off the past.

“Do you plan to go for contrast or complimentary colours?” Mandy asked.

I nearly died. Well, you don’t expect someone you cremated five years previously to pop up and start offering advice on colour schemes.

“You need an elastic band for that jaw,” she said flatly.

I snapped my mouth shut and stooped to pick up the litter of papers, colour-charts, and designs. “What’re you doin’ here?” I asked, finding a weak voice that perfectly fitted the occasion.

“Well excuse me,” I replied dryly. “I seem to remember a funeral, I went to it, I organised it. That seems like leaving to me. Seems pretty final I’d have thought.”

“Ah, yes, that. Well, apart from that, I’ve been here all along. Besides, I figured you needed some help.”

Naturally I was horrified. It didn’t seem to worry Mandy though and as I set about giving the house its face lift she watched, giving advice when she thought it necessary and adding her comments to my choice of colour shade and painting technique. She even came with me to the DIY store. It would’ve been okay but she insisted on discussing colour choices and designs in the shop so I harvested a few strange looks along the way. Eventually I was ready for a carpet fitter.

Mandy stood hands on hips, looking around the hallway with its pastel colours and fruit flavoured whites. “You know, with practice, you’ll be almost not bad.”

“Thanks,” I said, “for the vote of confidence.”

Exhausted, I sat on the stairs among the empty paint pots and used brushes and Mandy crouched next to me. For a moment we stayed there in companionable silence. The spring sunshine burbled through the front door and chuckled up the stairs – so full of the promise of a fine summer and so sure to disappoint.

“I should have listened.”

“I never got the chance to say goodbye,” she said. “Besides, you never really let me go.”

I sighed heavily. I knew defeat when I saw it and it was staring me in the face with a shield, armour and lance backed up by a thousand archers and pikemen waving banners. In the five years since her death Mandy haunted me and the aching never really left because there was so much we never said, so much we took for granted, so little time. Clichés all of them, but clichés are what make our lives go round – because they’re little truths neatly packaged in metaphor, the bricks and mortar that grease the wheels of language, so we can say what we mean without really saying it. Somethin’ like that, anyway. I stared at her, longing to hold her but knowing that she was little more than translucent ectoplasm – maybe not even that, just something hovering in my imagination.

“I loved you from the moment I saw you,” I said. Guess I should’ve joined up along with Paul. Crimea would’ve been a pushover.

“I know,” she murmured gently.

She smiled and kissed me on the cheek – a cold whisper of still air that for the briefest moment was almost her and then she was gone.

The ghost of summer past slipped out of my life, leaving in her wake the spirit of summer future. Alone, I sat among the dust motes dancing in the shafts of sunlight with tears streaming down my cheeks and my heart lighter than it had been for five years.

This and other stories can be found here. 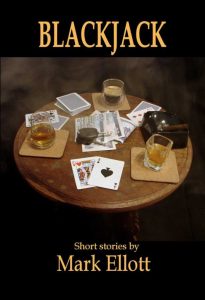