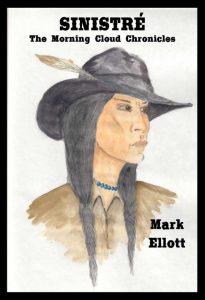 Sinistré – The Morning Cloud Chronicles started life as an idea somewhere on the M4 heading back to Bristol one afternoon. Much like other characters, Sinistré drifted into my consciousness fully formed. Unlike other characters she went straight into a gunfight. The epic westerns of my childhood have always held a fascination and I wanted to write stories that paid homage to those tropes. In the first of these five stories, you will see a nod of the stetson to Shane. Elsewhere, the man with no name and the magnificent seven.
Each story is told from the perspective of a minor character who observes Sinistré as a friend.

“I was loadin’ the buggy up when she rode into town on that big bay of hers. I stopped my work and, briefly lifting my hat, wiping the sweat from my brow and shielding my eyes from the sun, watched her as she rode down the town’s dusty street. Lounging in the saddle after days on the trail, with dust spattered down her full length coat, she was an image that burned into my eyeballs.

Folk hereabouts said she was a half-breed Comanche and I reckoned they was right, too. Long dark hair flowed from under her wide brimmed hat with its eagle feather dangling from the brim, beads braided into the strands of hair that fell down each side of her face with its strong straight nose and dark eyes and knee-length black leather boots with silver spurs tucked into dark cotton pants.”

And so Sinistré rides into these stories as described by young Jack. With a tip of the hat to the Man With No Name and Shane, she rides through these stories with an aura of mystery to those who know and love her and a lethal, rapid draw to those who stand against her. Each story unfolds from the viewpoint of someone who comes to know her as a friend; each a life touched by the gunslinger who walks outside of society, riding her own trail.