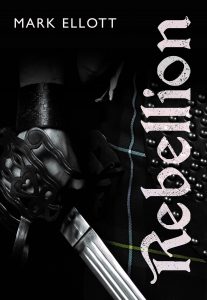 Rebellion is my first attempt at historical fiction. I have always been fascinated by the Jacobite uprising of 1745 and at just how close it came to success. So writing about it was an inevitable outcome. For a long time, though, all I had in my head was the character of Ewan McLeod as he sat by the roadside. I could see him in my minds eye, sitting astride his horse in the aftermath of the rain. Eventually, I had a plan for him:

It is May 1745 and the British army is licking its wounds following defeat at the hands of the French at Fontenay. Meanwhile, there is a stirring in the north as the restless clans are gathering to the standard of the House of Stuart where Prince Charles Edward Stuart, the Young Pretender, is forming an army ready to invade England and reclaim the thrones of England and Scotland for his father, James III.
Captain Ewan McLeod of the Royal Scots waits by the roadside in Northern France for a carriage. A carriage that carries the man who will send him on his next mission. Perhaps the most dangerous mission he has undertaken, for he is to be sent home to the highlands of his youth and to his estranged family in the service of the crown.
As the Jacobites march south, so too do Ewan McLeod and his comrade Fiona Ross as the Hanoverian government struggles to respond to the threat they had underestimated.

And who is betraying Ewan and Fiona? Not only must they keep their spymasters informed of developments, they also seek to discover the identity of the traitor in their midst before one or both of them dies.

Fun fact: There is a link between this story and Ransom. Stephanie Ross has an ancestor in Fiona Ross. Also, during my research I discovered that the failings of the Hanoverian response left a big enough space to squeeze in a fictional conspiracy.

Rebellion is available on Amazon.